Engineer Rasmi Al Jabri passed away suddenly yesterday on a walk outside his home in Erbil. He will be missed by his family, his tribe and his many friends, colleagues and admirers.

Rasmi was born 1939 in the city of Qurnah in Southern Iraq, where the two great rivers meet and where, it is said, the Garden of Eden once stood. His long and beautiful life encompasses the rise and fall of Iraq in the 20th century and the struggle for Iraq following the war of 2003. Rasmi was a true patriot who cut across political, ethnic, and religious divisions, which all rather seemed strange and artificial to him. He was a man of exceptional integrity with wonderful humour. He loved being part of the community he happened to be in and spoke to all people around him treating them with equal respect, be they ministers, mullahs, taxi drivers or waiters.

Rasmi was constantly on the move in Iraq, in the Middle East, Europe, and Canada, but he never left his home country for long. This happened only once to complete his studies as chemical and petroleum engineer in Birmingham. He loved and admired the United Kingdom and he fully dedicated his last years to building ties between Iraq and the UK. His work with IBBC was purely voluntary and his achievements were so great that you could not have advertised for someone to do the same.

He started with IBBC as an early member representing his company the Basrah Engineering Group (BEG). After a few years he decided to hand BEG over to his associates and to fully engage with IBBC. He first joined our Executive Committee, and soon afterwards became our Iraq Representative to finally join the IBBC Board and become Deputy Chairman.

He worked tirelessly at resolving problems of our Members in Iraq, but his real delight was to organise large delegations of Iraqi businessmen from all regions of Iraq to attend events in London. This effort culminated in over 400 Iraqi businessmen coming to the UK thanks to his efforts last year alone. There is an argument to be made that these businessmen did little business during their visits but this missed the fundamental point that having them leave Iraq and visit the UK was a crucial achievement in itself. It opened a first door to the wider world for many of them and at the same time created a unique feeling of cohesion and patriotism between these large and diverse groups of Iraqis, who found themselves visiting a western country often for the first time.

For more than a year now Rasmi has been working closely with our Baghdad office manager Muhanad Al Khatab, particularly when it comes to the organisation of these Iraqi delegations. I know that Muhanad who had deep sympathies for Rasmi and resembles him in many ways will continue this important work in the years to come.

In July of last year Rasmi, Brigadier James Ellery and myself visited Ramadi following an invitation of our friend and former MP of Ramadi Jaber Al Jabri. When we arrived at Jaber’s residence we found the great reception hall filled with maybe 50 or 60 dignitaries representing the tribes and the political and academic elites of Anbar. For 2 hours Rasmi spoke to all present about IBBC, the United Kingdom and Iraq, and why we had come to visit, and he listened and responded to all the comments made and questions asked. It was a very lively discussion which Rasmi mastered completely on his own talking to these important people whom he had never met before. Our excursion to Ramadi was indeed successful with the Governor of Anbar visiting IBBC in the UK only a few months later.

The day of Rasmi’s demise I spoke with him as I did almost every day and told him that one of our Members was in advanced discussions with Anbar governorate to engage in a major infrastructure project. This news pleased him, but did not surprise him, after all was it not the logical thing to happen?

Sayyid Rasmi whom I have never seen wearing a black turban and who in bars and cafes amused himself and others by ordering a gin and tonic without gin, will be deeply missed. It was a true privilege and blessing to have known him so well. 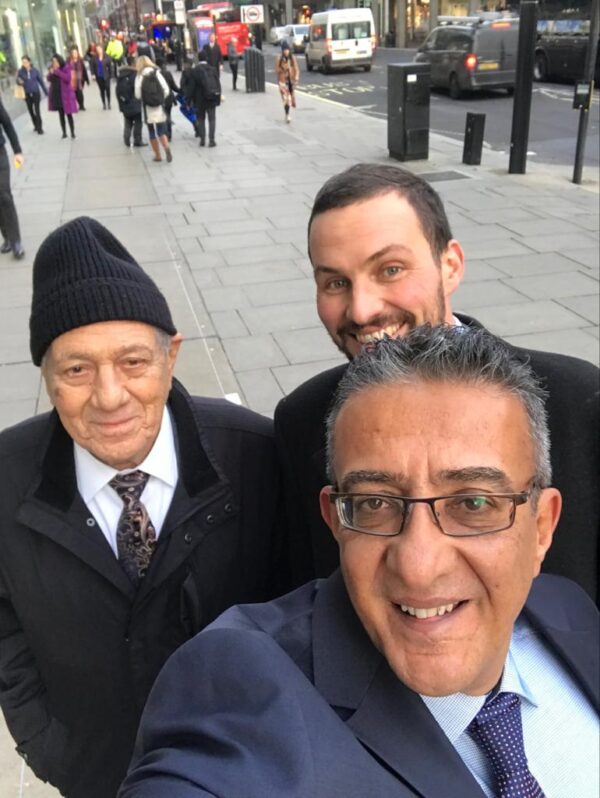 Our loss is immense and unmeasurable. Rasmi al Jabri was saluted by all of us fortunate enough to know and work with him. His memory will always shine and his legacy will grow in richness and strength as we recall and honour his precepts.

What a joy to have been counted among his countless friends and to have known his wonderful and high talent sons and daughters. We pay tribute to his many family members of all ages and his lifetime of devoted colleagues. 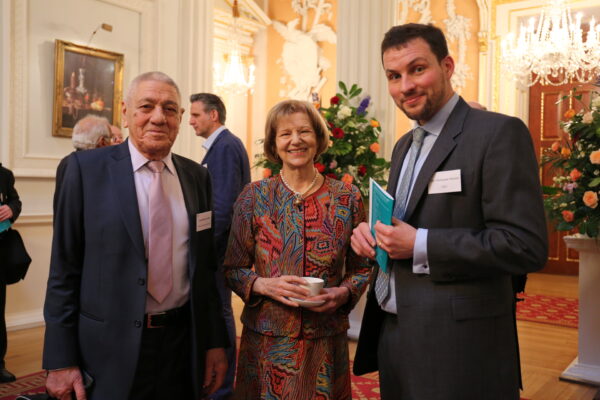 Goodbye Rasmi, you have pained our hearts were with your departure. I have known you for more than 62 years, as we studied, worked and travelled together and our last meeting was over the phone last Thursday, the day before your sudden death on Friday.

Throughout those years, you always loved life, and life loved you, its burdens did not concern you, and how many times it burdened you! but you always welcomed life with happiness, optimism and hope. You never knew the path of pessimism. You made all those around you happy with your funny humour and sometimes played practical jokes on those who didn’t know you, so you loved everyone and everyone loved you.

You were filled to the last moments of your life with diligent and continuous work and activity. In the last ten years you created a position and presence for yourself within the circles of politics, industry, commerce and education, be it in Britain or Iraq.

I don’t know how to honor you, Abu Zaid. The pain in my heart hurts me, the tear in my eyes keeps me in check, and the memory of our long days deprives me of my sleep.

May God have mercy on you and may you dwell in His heaven forever. May He also grant patience and solace to your sons Zaid and Talal and to your daughter Rehab and also to your family, friends and all those who loved you. We belong to God and to Him we shall return. 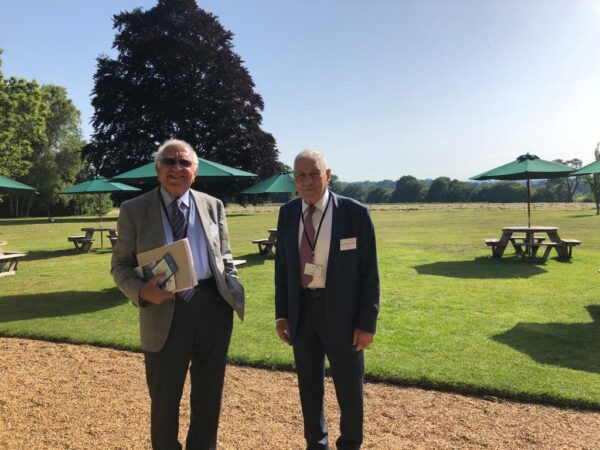 Sayed Rasmi, that is how I used to call him and that is how most people in Iraq knew him. He was a wonderful and very active man, who spared no efforts when it came to helping Iraq and its people, and that is the real reason why he joined the IBBC and later became Deputy Chairman. A very generous and benevolent man who wanted no rewards for what he did. I remember one time when he was sitting in the passenger seat in my car on our way to meet one of IBBC members and he received a phone call from a friend he had not spoken to for a long time. It seemed that his friend was asking about Rasmi’s company and business. Rasmi laughed his usual laugh and said that he had retired, and he is dedicating all his time to the IBBC now. His love for his country and his dedication and tireless work for IBBC was so inspiring. I will try to follow his footsteps and continue his legacy, but I will miss having him beside me to give advice and guidance. I will certainly miss his high spirit and humour, which he maintained even when things were not going right.

It was a great privilege to have known and worked with you Sayed Rasmi, you will remain in my heart forever. 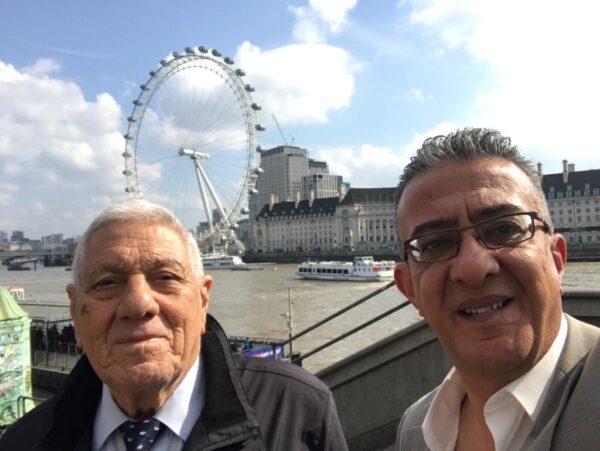 THE INSPIRATION LIVES ON

To some a great businessman, to others a brilliant engineer but to me he was much
more. Rasmi Al-jabri was my educator, my teacher. My name is Nooralhuda Ahmed Al- Jabri and Rasmi Al-Jabri was a very influential and necessary mentor in my life. I did not get the privilege to see him as often, but, notwithstanding that, he still succeeded to inspire me and many others. Amongst them, my own father, who was his little nephew. His zeal was beyond this world. Uncle Rasmi built everyting, every empire from the ground up, that is one of the innumerable reasons why I, as the third generation, am very persuaded by him. His father was a farmer and yearned for Rasmi to do the same, he refused. Instead he decided to study abroad, in England. He had no money nor possesion and was financed by my grandfather. He earned his degree and moved back to Iraq where he ended up doing tremendous things. Rasmi was perpetually present during Basra’s most arduous occurrences to prevent and save our marvelous city. He referred to Basra as the city that was crafted by God himself, a golden city. He vetoed to belong to any political party in Iraq, it was just him seeking to get Basra to flourish back to its magnificent self. What we cherished most about Rasmi was his joy. He used to say that he learned the meaning of life during his studies in Birmingham. He experienced freedom and wanted to give that feeling to the people in Basra who, during the painful and hard times, forgot what it is like to be free. Uncle Rasmi never let any sickness get the best of him. Although he struggled with cardiac problems, he refused to stay at the hospital. He desired joy and peace of mind and that is the reason why he energized most. When Rasmi spoke, everyone felt his passionate ways through his words. He used to speak so highly of one particular woman whom I feel very inspired by. That woman is Emma Harriet Nicholson. When he spoke of her, everyone felt exhilarated by the Baroness’ wonderful deeds in Iraq. We were told about the AMAR foundation, the orphan school and hospital. I later did my own research and came to the conclusion that she is a woman many should aspire to be, including I. People like Emma Harriet Nicholson and Rasmi Al-Jabri inspire young women like me to be driven, passionate but most importantly joyful. People like them push me to keep making art and earn my degree so I can give back to my people, who deserved better, but did not get the chance to do better.