Close this message
Home / News / In the Spotlight – Michael Townshend Regional President of BP Middle East Speaks to IBBC ahead of the Autumn Conference on 25 November.

In the Spotlight – Michael Townshend Regional President of BP Middle East Speaks to IBBC ahead of the Autumn Conference on 25 November.

Ahead of the IBBC Autumn Conference in Dubai on 25 November, we spoke to Key Note Speaker Michael Townshend, Regional President of BP Middle East. BP is a founder member of the Iraq Britain Business Council, contributing throughout the last decade despite the many challenges and barriers.

BP has long been involved in the exploration and production of oil in Iraq. In 1953 the Iraq Petroleum Company (IPC), of which BP was a key partner, discovered oil in Rumaila, near Basra in southern Iraq. Despite many challenges, BP became the first international oil company to re-enter Iraq after a period of 35 years, first conducting a technical evaluation of the Rumailia field with the Ministry of Oil before developing the site into what is currently the third-largest oil producing field in the world, estimated to have around 17 billion barrels of recoverable oil remaining. 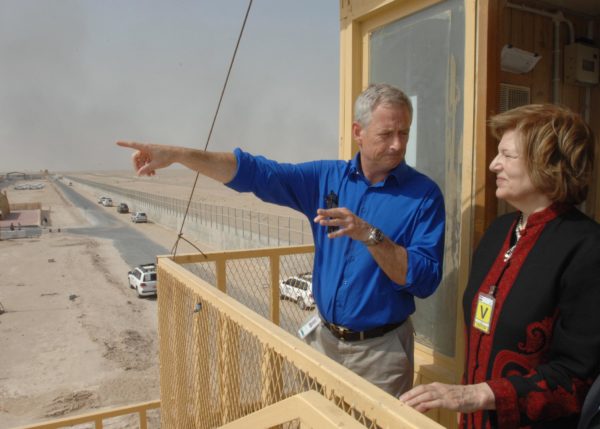 Michael Townshend with Baroness Nicholson of Winterbourne, President of IBBC,, during IBBC’s first visit to Rumaila Oil Field in 2011

John Scott, Oil & Gas Advisor for IBBC briefly spoke to Michael about this success story and the future of the Oil & Gas sector in Iraq:

Rumalia has undoubtedly been a huge success story and Michael stated the key to this achievement was “working with your partners to make improvements every day”. Working closely with State owned Basra Oil Company and PetroChina has allowed BP to develop Rumaila, which is now one of the most efficient fields in the world and contributes around 30% of the budget of Iraq. In light of the considerable challenges facing companies operating in Iraq, Michael said that to succeed one needs to “act with integrity, be patient and resilient”. Rumaila will benefit from over 100 years of BP experience in pioneering technologies and working at the frontiers in the most challenging environments.

BP are set to continue their progress in building Iraq’s Oil & Gas Sector and asked what are the major challenges facing the sector today, Michael stressed the considerable dual challenge of how do you meet the growing needs of energy in the world with a lower carbon footprint. For more insights, you can hear Michael speak at the upcoming IBBC Autumn Conference in Dubai on 25 November:

IBBC holds its annual Autumn Conference in Dubai this weekend on the 25 November. The conference will feature a session on Energy in Iraq with representatives from Chevron, Shell and GE, as well as a keynote address from Michael Townshend. Other sessions will focus on Infrastructure, Logistics, Finance & Regulatory Framework and new technologies.

To find out more about the conference visit: https://iraqbritainbusiness.org/event/autumn-conference-dubai-uae