IBBC fielded two speakers on the Conservative Middle East Council fringe session on 5th October at the Manchester conference centre. Both Baroness Nicholson and Ashley Goodall discussed various subjects ranging from new opportunities in the Middle East and gulf region for trade and perceptions of the UK from these countries. 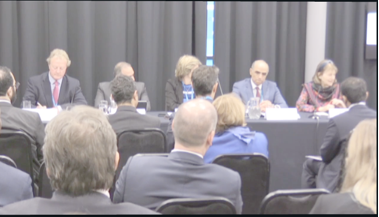 Baroness Nicholson made telling points about the need to generate work for many of the unemployed people in Iraq, and the importance of IBBC in providing high quality work and training, as well as humanitarian support in health and education. Ashley Goodall explained that Iraq can be considered a catch up economy that has been left behind for 30 years and therefore there any many core areas that require investment and modernisation, and therefore opportunity to get involved, from infrastructure, to banking, agriculture, health and consumer goods. The general view of the UK is positive as our system of government and rule of law is seen as a model, in addition to the significant footprint British companies have in the country.

In attendance were 4 ambassadors and their representatives, including Saudi, Qatar, Bahrain, Tunisia, Kuwait and officials from Iraq Embassy in UK, and the well-attended session was hosted by Charlotte Leslie (former MP and director of CMEC).