IBBC members, Lords, friends and trustees hosted a dinner in honour of founder and president, Baroness Nicholson of Winterbourne, at the Royal Overseas league on 19th October. 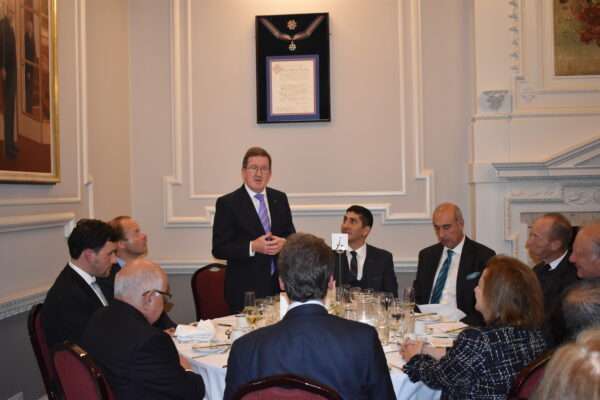 Speeches were led by Vice President Lord Robertson, who remarked that at times when democracy and western values are under pressure from adversaries, there are those, like Baroness Nicholson, who are and have always been a shining light of example, ensuring fair play and democracy prevails above conflict and dictatorship. In a heartfelt speech he underlined the Baroness’s 30-year commitment to supporting the people of Iraq, and those who were victims under Saddam Hussein, such as the Marsh Arabs and Kurds, and her continuing dedication to providing healthcare and education those displaced by IS and the most vulnerable in Iraq, such as the Yazidis and the poorest in Basra and central Iraq. 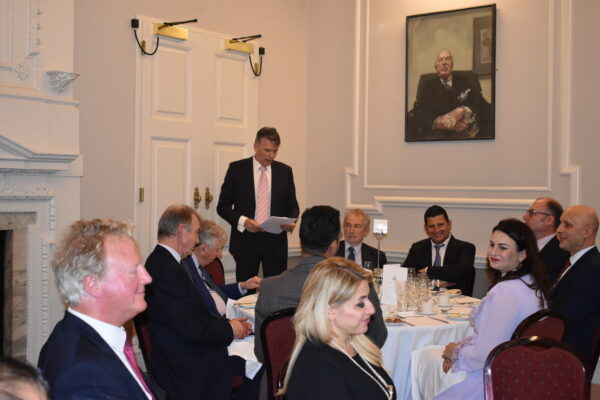 Mr Hans Nijkamp, Commercial Director of Shell, and member of IBBC Advisory council, outlined her enormous contribution to IBBC and Iraq over her 30 year period, and explained that Baroness Nicholson, has had such an extensive life of service to so many people, that he was unable to include all of her achievements in his speech, suffice to say that she is also a continuing Trade envoy to Iraq, Azerbaijan, Turkmenistan and Khazakhstan, is the President and founder of IBBC, and Founder and chair of the AMAR Foundation, also providing health and education to the poorest in Iraq, as well as being a well-respected British figure among successive governments in Iraq.

Mr Christophe Michels, MD of IBBC also outlined his experience with Baroness Nicholson while she was elected to the European parliament, and her ongoing commitment to the children of Romania, and a number of significant humanitarian interventions she made in relation to human trafficking. He went on to explain how she set up IBBC in 2009 and the current influence and success IBBC enjoys in Iraq, as the leading business council that brings together Ieading Iraqi, British and International companies in a transparent way, to provide best practice, expertise, training and jobs into Iraq He also thanked the Baroness personally for the opportunity she had provided for him to run IBBC.

The evening was preceded by a short choral concert that reflected the Baroness musically, including Bach, a west country song from her constituency, and Purcell’ If music be the food of love’ to recognise her love of music.